﻿ 2013 Februaryarchive | China232.com Blog can you take phentermine with high cholesterol is thinning hair a side effect of metformin what is the most tylenol you can take while pregnant is there a generic drug for cipro can i take diovan and atenolol together
China232.com

Our Thai Cat… Part 2 (With Pictures)

I attached the photos in this blog (below) 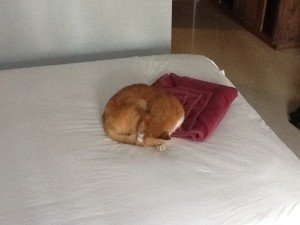 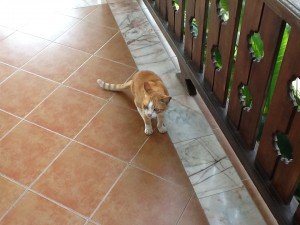 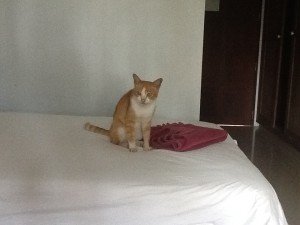 This cat is really cute and sneaky.  I felt sorry for the cat because the way she was acting.  She had those cute little sad eyes.  I wanted to help so I found her some food and water.  I let her sleep on the bed.  I liked it actually.  Cats look cute when they sleep.  (I realize it doesn’t sound very manly to say that, but I don’t care, this cat is CUTE!)

The next day I was noticing that my little cat has been playing this trick on all the people at the hotel.  There was a Russian couple staying in the room beside me.  They went to the store and bought cat food for the same cat.  Then the cat moved to the next room for more stuff.  Hilarious.  Everyone loves this cat.  She tries to look all poor and innocent, but she gets whatever she wants.

The funny thing is that I still love this cat, perhaps more now than ever.  She’s just a tricky little cat.

Have you ever heard the slang phrase “cat nap”?  That just means a “short little nap”.  In one of these pictures, you can see a REAL cat nap.  She’s sleeping on my bed.  I’m not sure if these pictures are the best, but if you saw the way this cat looks and behaves in real life, I think your kind human heart would come out and you would experience the same thing as me.  It’s not only me either.  It’s all the hotel guests!

(I’m charging my phone so I can’t take a picture now, but I will if you guys want.  Just let me know in the comments)

On the island I’m staying on, there are a TON of stray dogs and stray cats.

“Stray” animals, are animals without an owner.  They just live on their own out in the wild.  No one takes care of them.  We usually use the word “stray” with mainly dogs and cats.   I think the reason we do this is because those are 2 very common animals that make for good house pets.

In spoken English, if you want to ask someone if they like dogs more or cats more, you could ask:  ”Are you a dog person or a cat person?”  That means, “Do you like dogs or cats?”

You could answer with “I’m a dog person” or “I’m not really a pet person”.  Something like that.

Anyway, now onto the story…

There is a super cute stray cat who always stays outside of my room.  She always waits by the door and wants to come in the room.  I felt a bit guilty when looking at the cute eyes so I let the cat in the room.  Now she always sleeps on the bed.  I’ve never been a “cat person” before, but her green eyes seduced me.

It’s so easy to get emotionally attached to pets.  Add and I had a pet rabbit when we were about 10 and 8 years old.  Our parents never wanted any other pets for some reason.  I think it’s mostly because my mom knew she’d have to take care of it and she’s the type of person who would not love dog hair all over the couch.

For the first time in my life, I’m starting to think seriously about getting a pet.

Do you guys have pets?  Are you a dog person or a cat person?

Do you recommend I get one?  What kind?

We have a famous saying in English.  ”A dog is a man’s best friend”.  I think I can understand why.  Dog’s are always happy and kind.  They never get angry the way girlfriends do either!  (Just kidding ladies)

Love to hear your thoughts as always.

I’m always trying to think of the most useful stuff to teach you guys.  I do put the majority of it in the VIP section for obvious reasons, but I want to make sure I remember to teach at least some of this awesome stuff to everyone who uses this site.   “I don’t want to toot my own horn… I’m just saying

I was watching some Hollywood comedy movies last night, while pigging out on ice cream, and I was reminded of both these terms below.  I used them a lot when I was in high school, and my friends and I use them quite a bit now.  Native speakers will LOVE it when you use this stuff.

Butt Ugly:  If someone is “Butt Ugly” it means they are super ugly.  They are the total opposite of someone who is hot.  It’s a very common but very mean thing to say.  It’s usually used between friends when they are talking about a person who isn’t in the room.  (It’s horrible if you say this directly to someone’s face).  And of course it’s not nice to talk about people’s appearance in a negative way, but let’s face it, it still happens all the time in real life.

Oh ya, I just remembered, it doesn’t always have to be about people either.  This phrase can be used to describe some things.  Someone could say something like, “I think the colors you use on your website look butt ugly”.  Or “Do you think anyone will buy from your site?  It looks butt”

The second one is:

Example 1:  ”She looked drop dead gorgeous in her wedding dress”

I hope you liked these ones!  Pay attention to native speakers and I’m sure you’ll start hearing these phrases often!

**For the fastest results EVER, Add and I highly recommend you get a VIP Membership

I’m always thinking of the best and most interesting stuff to teach you guys. I want to start teaching 2 awesome terms on each blog post (If I can think of good ones) so that you will learn at least 1 (maybe 2) useful things every time you visit this blog.

The first term I want to teach is “Toot your own horn“. I was just listening to another podcast about technology; the guy making the podcast said, “I don’t want to toot my own horn but…” If you “toot your own horn” it means you are bragging or showing off. You are talking about how good or awesome you are. People want to seem modest, so if they want to say something good about themselves, it’s better to start by saying, “I really don’t mean to toot my own horn but…” That means, “I realize this will sound like I’m bragging a little, but I just want to say…”

Ok… Maybe you knew that first term. I will be very surprised, and impressed, if you know this second term. It is, “Sadie Hawkins dance“. This is a very interesting cultural thing that happens in the West (Sometimes). Traditionally, if there is a school dance, it is common for a guy to ask (invite) a girl to the dance. This is just how a regular dance works. In every culture I can think of, it’s the guys asking the girls on a date, not the other way around.

A “Sadie Hawkins dance” is a dance where the girls are the ones who invite the guys. I remember we had Sadie Hawkins dances once a year when I went to high school. I totally forgot about this term until last night when I was watching a movie. I stopped the movie and immediately wrote it down because I was excited to teach it to you guys. If I don’t write stuff down, I forget about it. Anyway, I’m glad I wrote it down and I hope this is a new term for you. Love to hear your comments as always guys!

*** BTW, Are you in the mood to take your English to an unbelievable level SUPER FAST? I hope you strongly think about joining the VIP Program NOW. Procrastination never helps anything. I don’t want to “toot my own horn”, but Add and I have been making some unbelievable lessons lately and we know you’ll love them. So… it’s really a perfect time to JOIN THE VIP ROOM! You won’t regret it! That’s a personal guarantee:)

I like sharing both English AND culture with you guys.  That’s what the 232 brand is all about.  It’s impossible to learn English properly without learning tons of new culture as well.

I just watched the “Super Bowl” today.  The super bowl is a very famous sporting match.  It’s the final game of NFL football.

Soccer isn’t so popular in America and Canada (probably because we suck at it).  So when we’re talking to each other about football, we’re talking about a different game.  And the most important game of the year is the “Super Bowl”.

This is a MAJOR sporting event on TV because about 100 million people in the US watch it on TV.  That is about 30% of the whole country.  More Americans watch the Super Bowl more than anything else on TV.  This means that advertisers LOVE this opportunity to make TV commercials.  Every year, companies pay a fortune (lot’s of money) for one 30 second commercial.   This year, one 30 second commercial cost about $4 000 000 USD

These Super Bowl commercials get talked about a lot.  It’s the best way to make many people think of your brand all at one time.  Now with the internet, Super Bowl commercials are even more important, because people watch them both on TV and then on Youtube and other video sharing sites.  They share the commercials on Facebook etc.  Blogs write about them.  Even I’m giving free advertising to these companies right now!

These are NOT just regular commercials.  The companies spend a lot of time and money designing these special commercials.  They are supposed to make people think positively about your brand.  They are supposed to make people talk about your brand.  They Can’t be boring.  Boring is a bigger fail than stupid or weird.

I wanted to start off by talking about Blackberry, Canada’s most famous technology company.  Maybe it’s because I’m Canadian, I don’t know.  Anyway, Blackberry is trying to get back in the smart phone game after totally sucking compared with Android, Samsung, and Apple.  They are starting to sell their new Blackberry 10.  It is by far the best phone the company has ever made.  This could save the company if people like and buy the phone.   I’m curious to hear what you guys think of the brand image of Blackberry in your country.

The commercial tried to be clever and basically say the Blackberry 10 can do so many things, therefore it would be easier to show you the things the new Blackberry CAN’T do.  It’s supposed to get people thinking and talking about the new phone.  Was this a good idea?  Here it is:

This one is a cute of from Doritos.  They are trying to show the relationship and a guy with his pet goat.  The goat loves to eat Doritos.  What do you think about this one?  (By the way, It’s a joke.  Americans don’t really have pet goats!)